FightCamp is Disrupting the Fitness Industry One Punch at a Time 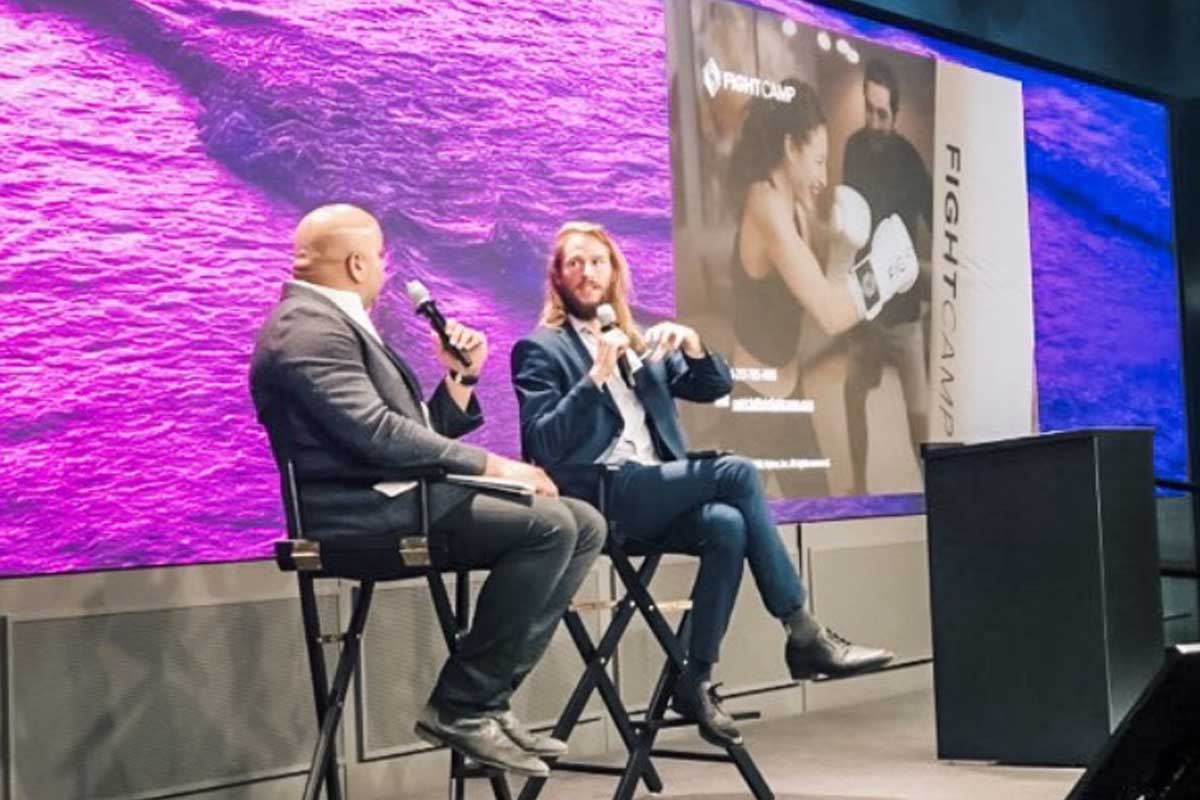 In a fitness industry that is booming due to wearable gadgets, budget-friendly gyms, infamous group training classes such as spin, yoga, boxing, and more, streaming exercise classes are also making a name for themselves. FightCamp, the “Peloton of Boxing”, has revolutionized the boxing industry by giving people a fully equipped, interactive studio boxing gym with a growing library of workouts to comfort of their living rooms.

The FightCamp brand began with punch trackers, which CMO, Patrick Chandler, told us are used by some of the world’s top fighters to track the effectiveness of their workouts. In late February 2018, the company expanded into the home boxing-fitness market by producing subscription videos and workout content. The company is now showing exponential growth in its online sales and just opened its first store at the Fashion Island Mall in Newport Beach.

At our co-hosted event with Google, CEO and co-founder Warren Jolly, lead a fireside discussion with the CMO of FightCamp, Patrick Chandler, to unravel the journey of such a unique product.

Patrick, what is FightCamp and where did this crazy, wacky idea come about from?

I can’t talk about FightCamp before I talk about a company called Hysko. We actually started out just building the first punch tracker- basically Fitbit for boxing. We created a hardware wearable that would just go on your wrist that was really made for a niche audience that was created for high-level performing athletes in the martial arts space. We kind of built that to a point where we realized this is not a big thing. The problem we initially sought out to solve was that we thought boxing was just archaic and it was left behind. Every other sport, like cycling, and the Olympics is insanely well tracked; even rowing everyone knows their erg score. So we just set out, what can we do in boxing? Bunch of us were boxing aficionados, we had people on the US national team, amateur boxers, and people who just wanted to solve problems we thought needed to be solved.

“We thought boxing was just archaic and it was left behind. Every other sport like cycling and the olympics is insanely well tracked, even rowing everyone knows their erg score. So we just set out, what can we do in boxing?”

We built this company and went down to Y-combinator and basically grew it to a decent size where pretty much every single high-level fighter is using us. There are articles that say Connor McGregor uses us. We’re not allowed to officially say that of course (laughs).

But basically, we realized when we were in that space, that there’s this whole other market that we’re not tapping which is obviously people who want to do boxing or could do it but not to a level where they want to. But the high-level gadget that we’ve created can be the answer. So here we are, and this is kind of where a couple of the biggest plays in the fitness industry happen with yoga, indoor cycling and then boxing. We are right there where you can see it just starts to head up and some big fitness trends like Equinox actually saw that as well and started investing in companies that were bringing fitness boxing to the maps. Being in a growing market is great and that’s why we created FightCamp!

It’s 100% everything you need to box from home. It’s this giant bag with a massive “FightCamp” on it, gloves, wraps, the trappers as well, and if you see on TV there, luckily enough, through launching Hysko we met some of the best trainers in the united states.

We got them, filmed content, and pushed it to our online platform through IOS device, Ipad, and Apple TV. And basically, in your home, you follow these workouts that teach you how to box, what to do, and we measure all your punches through those trappers. So that’s the massive interactive system that we’ve been building for the last 2 years.

Talk about your success since launching?

We grew from no-one in 2015 to 3,300 people and as you can see Q4 is a massive section of the year. The holiday season we’re in this perfect spot where we’re not just a gym and not just a piece of hardware, we’re a combination of both. We actually see great returns throughout November, December, January, and February. It’s kind of a fun place to be.

How has Peloton helped and hurt the growth of FightCamp?

Peloton, we really enjoy them a lot. They kind of grew the space and got everyone to understand this is a legitimate, massive industry. The way that I think we complement each other, is that our early sales came from pretty much Peloton people. And so our first ads involved Peloton bikes. One of my favorite ads- I just took my phone out and took a photo of FightCamp and the Peloton right next to each other. Probably our initial few 100 people were Peloton users.

From the content and marketing perspective, what were those initial foundational elements that really put FightCamp on the map? What did you learn through that experience?

One of the things we actually learned early on is obviously the website is massive. Everyone has to pay a ton of attention to their website. In fact, we actually launched this product with a terrible website and our CPA’s were insanely high. We really needed to drill down into our website and understand if you’re selling such a high-value product (1,000 to get the whole setup and $39 a month) so we are selling something with immense value. So the perceived value of our product immediately is people looking at it online and thinking- this is way too expensive.

We had to dig into video, optimizing and making sure everything is beautiful. Good studios, good spaces to film, getting cool content changed the game for us.